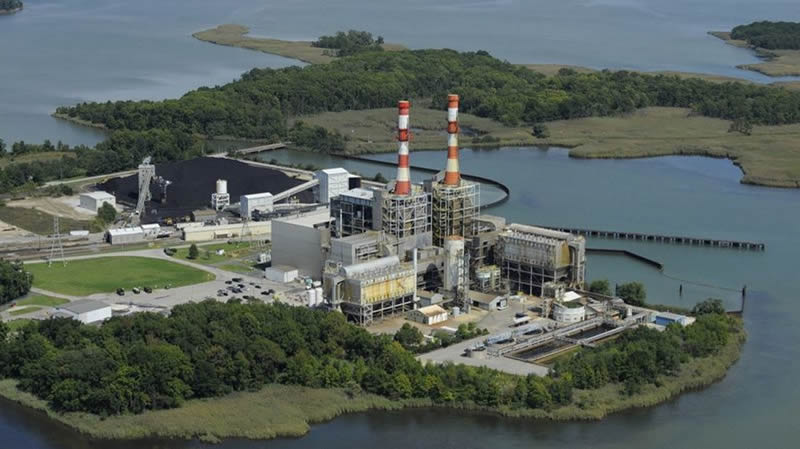 Later this summer, carefully placed explosives will render a controlled im-plosion of the hulking structures, erasing from the waterfront landscape the towering remnants of the decommissioned coal-fired power plant in Middle River, according to a representative for the company that owns the site.

Tom McKittrick, CEO of Forsite Development Inc. which owns the 157-acre Charles P. Crane Generating Station property, located at 1021 Carroll Island Road, said he anticipates taking down the largest remaining parts of the facility, including the 300-foot iconic smokestacks, near the end of June.

“If you live around here, you might hear it,” McKittrick told members of the Bowleys Quarters Improvement Association at the group’s most recent monthly meeting.
For safety reasons, company officials are not releasing the exact date and time of the event, he explained.

“When you do one of these con-trolled explosions. it’s very exciting; everybody wants to watch it,” he explained. “But when everybody is trying to watch it, that’s when danger is introduced into the equation. “If we let the public know that it’s happening, people, kids, teenagers, urban explorers are going to want to try to get really close to watch this and we cannot have that,” he continued.

Instead, McKittrick assured those in attendance the company will capture video footage of the event to share with the community.
“It will be some of the most incredible video you ever see from drones and from every imaginable angle,” he said.

Though less dramatic, McKittrick also assured neighboring homeowners that 100 percent of the asbestos and any other potentially hazardous materials will “absolutely” be removed prior to the building’s implosion. Additionally, water cannons will reduce the amount of dust created and keep it from traveling off site as much as possible.

“There is going to be a dust cloud,” he said. “You can’t tear down a building without having some dust. But there’s nothing in that dust other than dirt and grit and grime.”

McKittrick made the announcement at the March 10 meeting of the Bowleys Quarters Improvement As-sociation (BQIA) as part of what he called a “listening tour” to gather input about the property and its future use as well as provide updates on its status.

Charlotte, N.C.-based Forsite, which specializes in cleaning up and redeveloping heavy industrial sites, acquired the C.P. Crane site last September but only recently began deconstruction of the facility.

“It took a long time to get the [demolition] permits,” McKittrick said.

‘One of the cleanest’

The company also is enrolled in the Maryland Department of the Environment’s Voluntary Cleanup Program and is working with state officials who are overseeing all cleanup operations on the property.

However, McKittrick called C.P. Crane “one of the cleanest coal sites” he has seen in his career.
“There’s not a lot of things to clean up here,” he said.

McKittrick said his company is accelerating remediation of the remnants of an oil spill that has languished on site for decades. Also, the ongoing asbestos abatement is about 60 percent complete and the company has finished about 40 percent of the necessary coal yard resto-ration, he said.

All told, the company expects to spend about $18 million remediating the site but may recoup a “meaningful” amount of those costs through the reclamation of metals and other materials from the parcel, he added.

Great, but what’s planned for the site’s redevelopment, neighbors eagerly wanted to know? McKittrick admitted he didn’t have any answers.

“I don’t have that,” he said. “We’re very, very early in the process of trying to figure out what we’re going to do with the property.”

Nevertheless, the company is interviewing land planners to determine what could fit on the site, what is the most appropriate use or what the market needs. Plus, the property has several constraints in the form of wetlands and Chesapeake Bay Critical Area setbacks making only about 59 acres of the property buildable, according to McKittrick. And Carroll Island Road being the lone, one-lane road to access the site is another major limitation.

“So no matter what we do, it’s not going to be anything that’s overly intensive for the community,” he said.

McKittrick also ruled out solar pow-er generation on the C.P. Crane site be-cause there is not enough land for a viable solar array. Nor is any kind of heavy industrial use expected, he said.
Regardless, said McKittrick, Forsite will come up with a redevelopment plan in light of their “considerable” investment in the property, despite knowing that no matter what is proposed some-one will be “wildly opposed” to it.

“We’ve got to come up with some-thing that’s not going to put a massive amount of stress on the community,” he promised.
Devin Crum is a reporter for the Peake and may be reached at devin.crum114@ gmail.com.